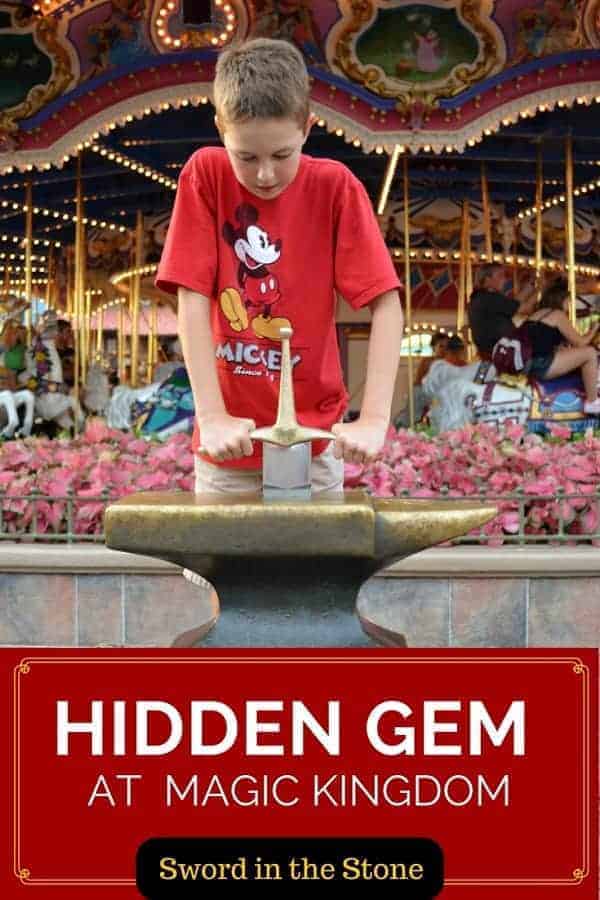 The Disney World parks are known to have several Hidden Gems.  One of our favorites is the Disney World Sword in the Stone. This unassuming monument is a great place to take a photo, but it also contains some magical Disney powers.

When you first look at the monument, the sword appears to be encased in an anvil. BUT if you read the plaque on the front, you will find out that it is possible to remove the sword.

Whoso Pullath out this sword of this stone and anvil is rightwise ruler born of England.

If you are able to release the sword from the stone, you can claim to be the Hero of Fantasyland!

Who wouldn’t want this honor?

While at the monument, we each tried with all our might to release the sword from the stone, but it wasn’t meant to be. This doesn’t mean YOU can’t do it!

If you happen upon the Royal Majesty Makers in Fantasyland, they sometimes perform a show and choose a child to pull the sword from the stone*

*The sword in the stone doesn’t fully come out, but is able to be lifted up about 6-10 inches.

Where is the Disney World Sword in the Stone Located?

If take time to walk around Fantasyland in Magic Kingdom, you will stumble upon the Sword in the Stone monument near Prince Charming’s Regal Carousel.

Where else can you see Sword in the Stone characters in Magic Kingdom?

Merlin appears in the Sorcerers of the Magic Kingdom game that takes you on a journey through out different areas of the park as you try to defeat Disney Villains.

Be sure to check out the Disney World Sword in the Stone next time you are in Magic Kingdom! Have you tried and been successful in removing the sword?