Toy Story Land, located in Hollywood Studios, makes you feel like you are walking through Andy’s backyard like you are one of Andy’s toys!

You will walk among giant building blocks, your favorite childhood board games, and iconic toys in the playground of your dreams.

Wondering what you can expect?

This family-friendly roller coaster takes you on a rip roaring ride on Slinky Dog! Talk about fun! This ride is just the right mix of unexpected turns and rip, roaring fun!

Riders sit two by tow on Slinky Dog and blast off on a tall track, followed by a steep drop into turns and bumpy tracks.

Midway through the ride, you stop, then back up, before being catepulted forward on more of the ride.

You finish with Penguin serenading you with “You’ve Got a Friend in Me.”

How to Ride Slink Dog Dash without Genie+

If you don’t want to pay for Genie+, the only way to ride Slinky Dog Dash without standing is a 2-3 hour line to follow these steps:

You will find that if you queue up for Alien Swirling Saucers right after you get off, you will hardly have any line. We didn’t wait at all!

Go inside a play set that Andy won at Pizza Planet! Your favorite little Aliens have powered up their flying saucers and will send you spinning!

It is a slow ride. Nothing like the spinning you do on the Tea Cups in Magic Kingdom, but once you get going, there are some fun twists to be had on the Swirling Saucers.

Walk through Andy’s collection of games and then board your own Carnival Ride Tram.  While wearing your 3D glasses, you will go on a carnival game extravaganza.

If you play well, you just might make it to top car!  Here is the list of games you’ll get to play: 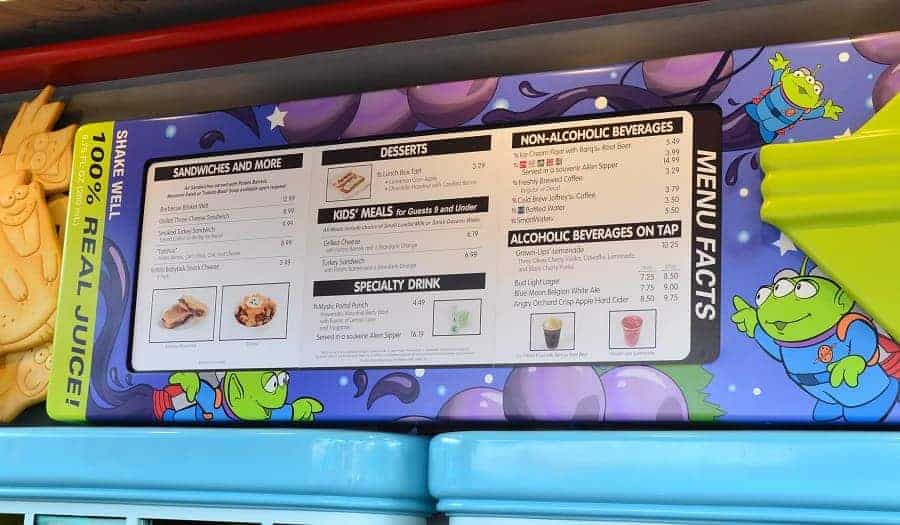 For lunch & dinner, they have a few soups, sandwiches (pbj, brisket & turkey), and macaroni salad.

I was a little disappointed that there wasn’t more choices.

You can meet Sheriff Woody, Buzz Lightyear, and Jessie the Cowgirl. You might also find Green Army men on patrol through this area of the park.

Toy Story Land is a great addition to Hollywood Studios and full of great things to check out! This part is quite busy, so if you plan on visiting, be sure to get there early.

What is your favorite part of Toy Story Land?